Our street became beautiful when the snow fell. Snow is perhaps one of the most maligned wonders of our world.   Most of the complaints about snow come from people not being used to it.  After all, snow is gentle and harmless, even at -20F (-29C). See the last paragraph for more on this.  We’ve had a great share of the beautiful stuff this past couple weeks. The biggest snowfalls in 20 years fell just two weeks ago and shut the city down for a week (wimps), and then on Monday a deluge rain turned almost instantly to snow as the temperature plummeted and left another foot (30cm) of white powder on top of the ground.

So many factors have to be in just perfect alignment that it boggles the mind if one dismisses the the Divine option.

As difficult as snow can be for auto manipulation or as back-aching as it can make one from shoveling several tons of the stuff, it remains one of the best evidences for God in a muddy world.

“He sends his command to the earth; his word runs swiftly.
“He spreads the snow like wool and scatters the frost like ashes.
“He hurls down his hail like pebbles. Who can withstand his icy blast?
“He sends his word and melts them; he stirs up his breezes, and the waters flow.” Psalm 147

He compares it to our purity once He has cleansed us:

“Come now, let us settle the matter,” says the Lord.
“Though your sins are like scarlet, they shall be as white as snow.
“Though they are red as crimson, they shall be like wool.” Isaiah 1:18

And the Ancient of Days seated on the throne in Daniel’s and John’s visions had clothing and hair “white as snow.” Daniel 7:14; Revelation 1:14. 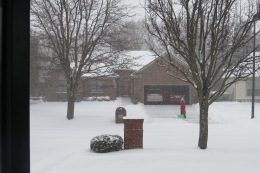 So it cannot all be bad. Just be careful when driving in it. Practice in an open parking lot next time; drink lots of water when shoveling to stay hydrated; feel for your fingers and toes whenever you are out, whether working or playing, and go warm up if they start getting numb. Use good sense and snow does not harm or kill any more than bullets by themselves do. It is the foolishness of people that is often more to blame for such injuries, just as it is the shooter to blame for injury, not the bullet. 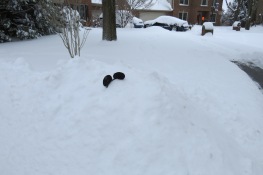