One year after the Beirut blast, a Lebanese Evangelical Christian reflects on the devastating explosion that left 300,000 homeless. by All Arab News Staff, August 4, 2021
How did Christian ministries respond to the crisis then? How should we be praying for the people of Lebanon today? 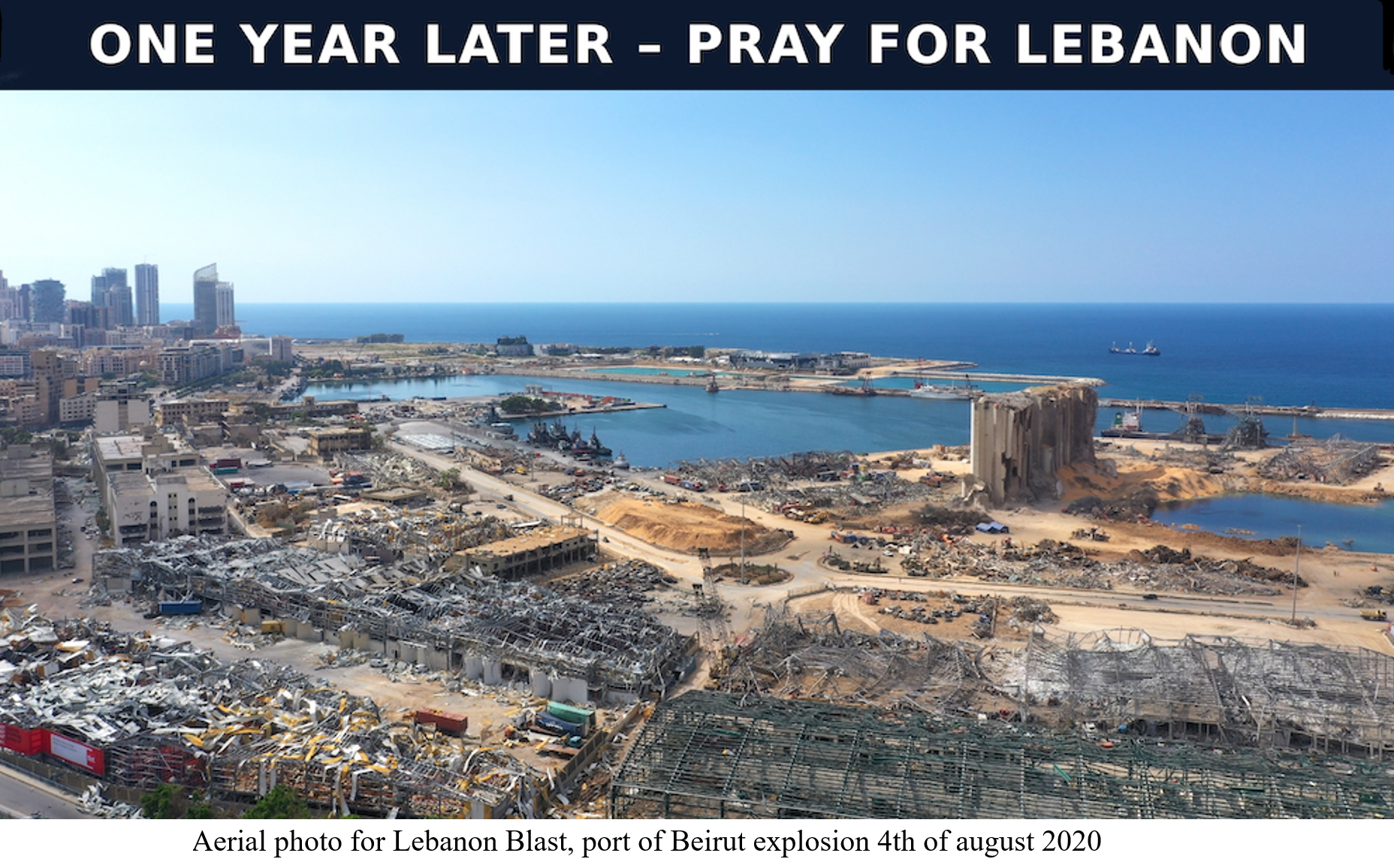 The following article was written by a Lebanese Evangelical Christian who lives and works in Beirut but is currently studying in the U.S. Because of the sensitive nature of the political and religious situation in Lebanon, the author’s name and organization are redacted.

BEIRUT, LEBANON – For every resident in Lebanon, and every Lebanese around the world, 6:07 p.m. on Tuesday, August. 4, 2020 marked the darkest day they can recount. Every person on Lebanese soil collectively experienced the largest non-nuclear explosion in history.

The blast nearly destroyed their capital. It killed 218 innocent civilians. It drove more than 300,000 individuals into homelessness. And left an entire nation traumatized.

Whatever you read about this day after the passing of 365 days, and whatever we all try to communicate about the tragedies of what happened a year ago, it is so difficult to explain the heartache of our people. We will never be able to relay the permanency and gravity of the loss, hurt and grief that millions of Lebanese continue to live in while also still living under the same ruling class responsible for the tragedy.

Not much has been done to bring justice to a nation that has been left to bleed economically, humanitarianly, socially, emotionally and politically since then. Facts about the cause of the blast are scarce. The site of the explosion remains an abandoned crime scene that leaves many questions unanswered for the families of the victims and for the Lebanese people as a whole. Most Lebanese who work in Beirut have to drive by that crime scene on a daily basis, reminded that somehow their lives must continue despite the heartache.

Many surveys are circulating across social media platforms about the effects of PTSD on those who survived, about survivors’ guilt, about mental health awareness and psychological support. These questionnaires only try to quantify the grief and categorize it into digestible pieces. But the Lebanese people still wake up the next morning to an ever-deteriorating Lebanese lira, scarcity of fuel, power outages, medicine shortages, and the complete dismantling of their quality of life.

The organization I work with here in Lebanon had offices less than three miles away from the epicenter of the blast. Most of my colleagues live within that same radius of the blast and can share individual experiences of loss on that day.

One team member shares about the miraculous way she was spared by running late to a wedding that she was going to attend less than a mile from the explosion that evening. A number of team members suffered damages to their apartments, and many more lived through the horrifying experience of long hours of survival check-ins from friends and family hearing news after news of whether the people they knew were dead or alive. As one team member explained it so well: “The explosion did not happen at the Beirut port. It happened inside every single apartment in Beirut.” What happened on August 4, 2020 literally extended to each of our team’s homes.

For me personally, it had been exactly a week since I left Beirut to return to the U.S. to pursue further education. I had argued with my dad for days to move my travel date forward from August 4 to July 29. He finally agreed. But if I had not won that argument, I would have been driving along that same route on that same day headed towards the airport.

I still remember so vividly on August 5 that our managing director gave a tearful message while addressing the entire staff as Arab Christians from all over Lebanon came to support the response on the ground in Beirut. It was so encouraging to see this response – it was organic, it was raw and it was difficult because it was the first time that every person working was both a victim and a first responder.

Our organization’s teams spread out across the city to spend the first several days cleaning up debris wherever there was a need. It soon became more evident, however, that our ministry was best positioned to respond to churches that were damaged or destroyed, Christian schools that were affected and any Christian families that were connected to either one of those two categories.

A week after the blast, we organized a team to venture into a new project, assessing material damage that was caused to the apartments of families that were referred to us by church members or affiliated Christian schools. The team quickly noticed that the immediate need was to secure apartments and to try and restore a sense of safety for families to be able to retreat to their own home with a peace of mind that, at the very least, they had a secure front door and that their windows were sealed. Therefore, the first response was to hire contractors who would ensure that all doors and windows of damaged apartments be restored for safety and security reasons. The work had to be done fast as families were pressing through their trauma and leaning heavily on us for emotional and physical support.

One of my colleagues told me a story from those intense days: “During our visit, the wife was in her living room watching TV as she prepared a traditional Lebanese meal for her family. When her husband started telling us about what happened on the day of the explosion, the wife started to get emotional. She got so emotional and repeatedly kept saying how she still could not believe that her husband is alive. She said, ‘He was so close to the explosion, it all happened in a matter of seconds. I called him several times, but he didn’t answer, so I assumed the worst had happened. Two hours later, I was breaking down. Nothing was clear. The whole country was in shock, and watching the news wasn’t giving me any answers. Then my husband called suddenly. I thanked God a million times for protecting him. If you knew how close he was [to the blast] you’d definitely understand what I went through.”

We knew exactly how close her husband’s work was to the explosion since we knew her husband very well. He was only a few feet away from where nearly 2,700 tons of ammonium nitrate had exploded, and in the most crowded street that contains many restaurants, shops and old historic neighborhoods.

Every family that our team visited to pray with and encourage had a miraculous testimony of God protecting them. The losses “should have been far greater,” said one team member to me. “When you walk along every street, and you hear the clinking of glass, and see the mass destruction that ripped through an entire city, and that was heard across the country, and realize how the Lord protected so many, you cannot but declare it a miracle.”

A week after the blast – and after seven straight days of picking up glass and salvaging people’s belongings from whatever was left, for 10 hours every day – our team gathered and sang songs of praise in the damaged living room of one family. A team member shared with me that it was at that moment that the tears came rushing through. The shock had subsided, and the tears did not stop. Everyone, however, seemed to come out of the shock and began to grieve at different speeds.

At one point early during the crisis, the founder of our organization prayed with leaders from across the nation to seek God’s wisdom and guidance in how best to make a difference, saying, “We should all allow ourselves to cry, but the hardest thing for me has been my inability to do so. I have been asking God repeatedly, ‘When God? When will those tears come rushing down? When will I truly be able to feel again after this paralyzing shock?’”

Sometimes, not becoming too emotional too quickly was a good thing. After all, with every apartment that our team entered, the more tragic stories we saw and heard.

One team member shared with me his concerns before going in to meet the first devastated family. He said he did not feel prepared to handle what he knew would be the needs because this was a community that was deeply scarred by the Lebanese 1975 war and now has compounded trauma. He was expecting to see resistance, bitterness, rage and a rebellion against God. However, he said that in every encounter it was as if the Lord had gone before them and people’s hearts were somehow ready to give praise to the God of miracles for whatever they had left.

After doors and windows were sealed, Christians rallied to rebuild churches. Schools were repaired and began to function again. But our team of Lebanese Christians from all over the country knew that they were not ready to leave yet. The financial and economic situation in Beirut remains unbearable. Families have not been able to recover since the blast as the economy continues to get worse. We have provided food and hygiene supplies to many families, but there is still so much more to do.

Today, my Lebanese Christian colleagues and I do not celebrate the efforts or accomplishments or initiatives that God has allowed us to be a part of to help those in need after the Beirut port explosion. We cannot because we see so many man-made atrocities and negligence. We are glad to assist local churches, but so many challenges remain here in Beirut.

Still, we do praise God for every survivor, for every story that points to the faithfulness of God who is merciful and who heals. We praise God, not for restoration of windows and doors, but rather of people and souls. Yet, my colleagues and I are still grieving.

We know of three young children who lost their mother in front of their eyes. We know a young man whose only mistake was that he was lying in his bed and died due to the injuries he sustained. It is hard to find goodness in the midst of evil and to see hope in the midst of despair.

Above all, we are grateful for the ways that many other Christians demonstrated Christ’s abundant love, mercy and grace to the people of Lebanon who live to tell the heart-wrenching stories of Aug. 4, 2020, and for the many miraculous stories of that fateful day.

Will you join us in continuing to pray faithfully for the people of Lebanon, a country we love so much?