After last winter’s ice storm that left three inch thick ice on it, a small deck I built for some friends several years ago needed some work.  I had stained the deck, but they had someone paint it before last winter, so now it always has to be painted. 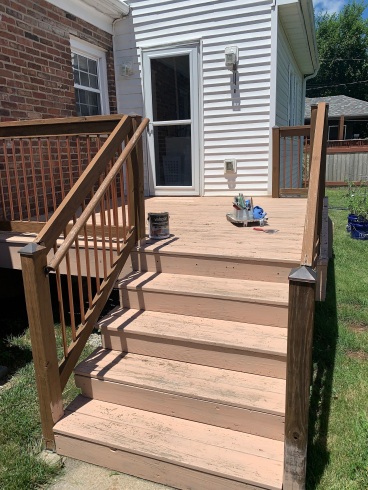 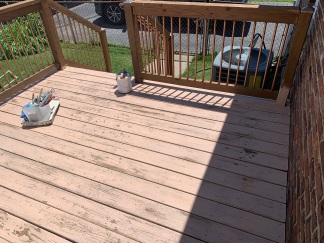 So I got out my scrapers and brushes and fixed ‘er up nicely.  The room to which it is attached was a laundry room addition that was most of the original project. 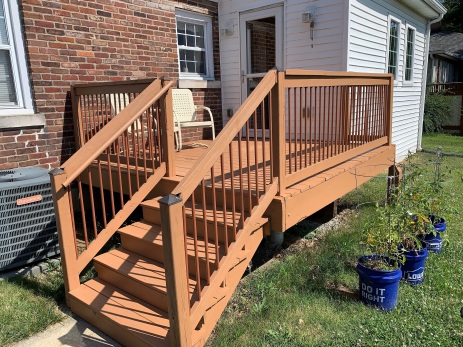 Once an open farm field, this area was “contoured” by the developer who put in the roads, electric, water, and sewer lines. The developer established the lot dimensions, street names, the deed restrictions which specify the size and character of the homes, the organization of a Home Owners Association (HOA), and even details, such as the type of mailboxes allowed.

Alliance Builders purchased the lot at 108 Manitoo Place in Ash Tree subdivision in August, 2014. Our intention was to begin building by the fall and get it “under dry” (closed in with roofing on and lockable doors and windows to keep it secure) by the end of the year. But then we ran into a glitch!

We had assumed six-foot (2m) side yards and pulled a house plan that would fit, but then found out Nicholasville has ten-foot (3.3m) side yards. This meant our first plan was too wide to put on the lot without setting it back so far, we would need a code variance either for the sides, or the back as it would extend into the utility easement at the rear of the property.

So it was back to the drawing board, and we hired Frank Culbertson, architect, to design a house that would fit on the property and look congenial with the neighborhood. This also allowed us to designate the roof pitch, and various features to the house to save money on construction, which turned out to be needed as we discovered.

We applied for a variance still, to set the house forward eight feet to avoid lots of fill as we discovered the lot was steeper than we had envisioned for the house. The back of even this smaller house Frank had designed was still over four feet (1.3m) out of the ground. In construction we would say the basement floor was four feet above grade. So another delay, as the Board of Adjustment that makes these decisions only meets once each month. So we waited for their meeting and got denied, so we’re building at the 30’ (10m) Building Line which sets the house way back on the cul de sac lot, but it is what it is, and we broke ground on Saturday, March 21.

Once the initial excavation was done (in less than four hours) we contracted to have the footers dug and installed on Tuesday, March 24.

Unfortunately, this was more of an ordeal than usual. Figure on a house of these dimensions, we would usually use about 14 yards of concrete (a cubic yard is 3’x3’x3’ or about 1M3).We would dig about three feet (1m) down, two foot (0.2m) wide, and put in one foot (0.1m) depth of concrete for the footer which is the “real foundation” on which the “foundation” of the house sits. But the footer must sit on “undisturbed soil” or bedrock, meaning the house will not sink nor shift with ground freezes. 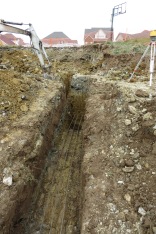 But since this land was recently contoured by the developer, the ground was “disturbed” about a year ago, and we ran into loose fill and shot-rock at part of our footer dig, up to nine feet (3m) deep!! The result was we had to pour in 70 yards of concrete!!! More than five times the normal amount we would use!!

Our footer team excellent job, digging the trenches and filling them with concrete, and even with the excessive amount, were able to finish the dig and pour in one day, leaving at about 8:00pm.

The next day, Wednesday, March 25, a man came back to clean up the dirt that had been loaded into the middle of the “rooms” as we had not cleared this during the dig to save time and get the concrete poured in one day.

So now we decide how much of the walls will be poured in traditional fashion and how much we will use Insulated Concrete Forms (ICFs) that will provide an R-50 insulation value. As we get closer to assembling the ICF walls, I’ll explain the insulation values and why we use ICFs.